This race was on my bucket list for quite some time. The strange thing with Ultra-races in the Dakotas is that there is only 7 that I know of, and 3 are within 8 days of each other! I decided to run my owned coined „Double“ this year. Meaning, after the prior weekend’s 12 hour race (64.17 miles), i decided to also compete in the 50K (31 miles) the following weekend. I can tell you upfront, I may switch up the distances in the future, as there is a 6 Hour option and an either 20K or 30K option. I tend to reach for the limits whenever I find a unique chance like this one.


After the successful prior race, I considered anything today would be gravy. Mostly, I was interested in seeing how well my body had recovered since the 64 mile effort a week prior. I knew that wasn’t my best performance (short by 13 miles/21KM), but I knew I wanted to save some energy for the 50K, so it’s all relative.
It was quite cold once I reached the depths of Newton Hills State Park in Southeastern South Dakota. I was listening to a podcast about how the Secret Service works at the time. The topic isn’t relevant, only that it was non-running to keep my nerves down.


Parking my car, I was happy to be running the 50K. We were starting an hour before the 30K runners and had therefore dips on the parking spots. There were only 12 or so of them. The next people had to park down the road and walk about a half to ¾ of a mile to the starting line. Suckers. I would never want to walk that far!


The temps were chilling. The few people already at the Start/Finish area setting up their drop bags, were huddled around a small campfire, which in one way is nice of the race directors, Karen and Nancy, but also quite punishing later on as we had to run best that warm heavenly shelter and keep going back into the cold dark woods. Ultra’s are sadistic beasts. Only us maniacs consider them fun.


I layed down my four pre-prepped bottles of Arizona Sweet Tea (those $0.99 ones you find in every gas station). Each had the bottle carrier pouches filled with Endurance Tap Maple Syrup (organic endurance gels). This way I could be in and out of the aid station in literally under 2 seconds! No reason to spend extra time out there!


The frosted grass tips cracked ever so slightly under our shoes as we approached the starting line. Nervous jokes were made and everyone got ready to start their watches. Looking around, I saw concentrated faces and steam rising from their heads and their breath was visible in the collective glow of everyone’s headlights. It was 6:01am. 17 degrees Fahrenheit (-9 Celsius). The signal was given and off we went. Cold air filling our lungs on the first big strides that loosened our legs as we commenced our journey for the day.


We had a couple hundred yards on an open grass field before the route went into single track heaven. That was enough to allow the fast guys upfront to gap the field and get going and us other runners to get in a forced slow rhythm behind, which allowed us to conserve some energy. This first loop turned out to be my least favorite, despite feeling physically the best this early on. We were so tight together, that I couldn’t see anything but the feet from the runner right in front of me. Picture this: a foot of dirt single track, ever changing in direction and random roots and rocks thrown in for fun. Despite my awesome 2000 lumens from Gears Spheres, I couldn’t shine my light through the guy in front of me and so I stumbled quite often as I had to react to things tripping me the distance of a Subway footlong away! Add into this that after the front pack (3-5 guys) my chaser group took a wrong turn (the directors clearly said „always turn right!“, so for some reason I told the guy in front of me: „Go right here!“.


I made up for my gaff by once again convincing everyone else to follow my direction, because I recognized the little wooden bridge crossing. „We just did this 10 minutes ago! We need to turn around!“ We picked up a handful of other runners who were following our headlamps and we were back on course shortly after.


That incident helped taking the self-imposed pressure out of the race. Now, I also had another excuse for not doing well today! This was now a 51K!


The rest of the first loop was uneventful. I recognized most of the trail even in the dark, as I had purposefully come down here a couple of times to run this park without pressure and study the course. I knew the big climbs coming up (Big considering the local natural features (300 feet/ 100 meters) and was looking forward to getting into a rhythm to be repeated five times total today.


I noticed the final half to quarter mile was all on an extreme downhill, which I loved! I happen to be crazy (or inexperienced enough with falls) that I go balls out! It’s no longer running, but control falling. I tend to extend my arms into an „airplane“ position in that situation to keep my balance, but I will run those section at least 3-4 times faster than most other runners. Take what the trail gives you!


During the second loop my new running buddy Chance joined me (or did I join him? I don’t recall the exact logistics to be honest). It was a nice change of pace (not literally, as we kept going pretty strong, but were conversing now to make the time pass). He had run in college and now attempted his first Ultra. In my „wise‘ 4 years of doing this madness, I was able to answer a bunch of this „whippersnapper’s“ questions (he’s like 5 years younger than me J ).


My aid station strategy paid off big time. Each lap I threw my empty bottle from a few feet away and picked up a new one without barely breaking my stride. Chance and other runners took a few moments to gather their items and thus I was able to start breaking away. He is such a strong runner though that even my aid station advantage only lasted for a few minutes and he cruised right up to me again.


After two loops we ditched our headlamps as we could now make out the trail in the immersing sunrise and welcomed the warming sunshine to hopefully begin to melt our already fully established frost beards!


Before the third loop was over, I slightly slowed down and Chance kept going strong. I was hoping for him to make the podium. A success in his first ultra would add another maniac to our small community long term!

The fourth go around was a mental and physical challenge. I couldn’t push too hard if I wanted to finish strong. My calf muscles threatened to lock up on the long steep uphills and their twitching took all of my attention so that i forgot to pick up my feet and on a few occasions I nearly ate some nice trail dirt. The stumbling helped me remember something that I learned a couple of years back. Usually when I run low on calories, I stop picking up my feet and generally don’t watch where I’m going very well. I downed the rest of my sweet tea with another Endurance Tap Gel and played the patience game until that sugar would hit my blood stream and help me refocus. I was elated when I was on the last downhill, knowing that I would only have to do this ordeal one more time.

However, the fifth and final loop was no ordeal at all. Even though it turned out to be my slowest loop of the day, I felt quite fast. The 20K and 30K runners were mostly finished so that I had plenty of room to run and any runner in my sight was a competitor (even though a few were being lapped, they still seemingly pulled me towards them so that the last few miles went by in a blurr. I found myself once again within about a mile of the finish and knew I’d be getting in under 5 hours, which was my main goal for the day. Not close to PR levels, but this challenging course was here for me to learn. I made up a spot or two and within a quarter mile of the finish flew by yet another runner on that kamikaze downhill (at least the way I run it). 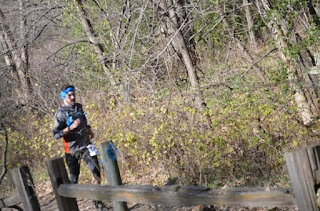 At the end, I came in 7th overall at 4:52h. The winner ran an insane 4:03h for a new course record. These young college kids! 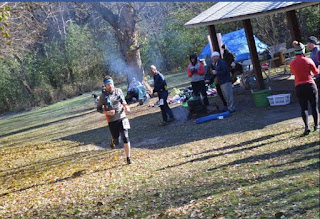 The sweatsoaked shirt had become a detriment quickly and I changed in my nearby parked car. Huddling up at the camp fire restored some energy as I cooled off rapidly after finishing. To my surprise Chance was turning the final corner and went by crossing the finish line. Turned out that I passed him when we went by the aid station between loops 4 and 5. He told me later he bonked hard. If he gets his nutrition right, he’ll win some of these in the future (Keep it up!)

The entire race was a great organized event (nice work Karen and Nancy!) and every runner I spoke to attested to the fun they had despite the freezing temps. I’ll definitely come back again, but now it’s time to rest a bit. My legs have carried me far between those 8 days and I was contemplating another „short“ little marathon the following week in Utah.
Eingestellt von Running the Globe um 6:21 PM No comments: