Her mouth moved, but I couldn’t quite make out the words. Leaning in, I noticed her cute dimple twitching with excited energy getting ready to repeat her expert advice for my upcoming race: “Run super fast, Papa!” My race strategy couldn’t have been summed up any better than the wisdom my 2 year old daughter let me in on. In addition the pouted: “Wanna race too!”. One day little mouse. One day.

For today I was loaded with all kinds of endorphins based on the cutest pep talk and the encouragement from my wife to have fun with my race.

Training had been going fantastic and I was anxiously awaiting the start of the FANS 12 Hour race. I was anticipating to set a personal best for distance covered, previously at 62.2 miles (100km). All conditions pointed at a successful outcome. I set my 100km PR in windy, cold Fargo on hilly sandy terrain. Today, I was going to run on a pancake flat, wind-shielded looped course, where I wasn’t forced to carry all my fluids and nutrition with me, but leave it at my own little aid-station to which I had access to every 2.14 miles. Temps were going to start out around 60 degrees and not exceed 73 during the noon hour. The race director’s instructions to follow the correct course were pretty simple. We just needed to make sure that the lake is on our left. That basically covered it.

So, 12 hours. There is likely more productive things you can accomplish in those 720 minutes. Like drive from Brookings, SD all the way through Nebraska, Kansas and Oklahoma. Not sure what you would want to do there (a race maybe?). You could watch the entire first two seasons of The Office and still have time to watch the god-awful The Happening and still have 13 minutes left over to try to recover from that tragic decision. Otherwise you can fly from Chicago to Shanghai in the same time span and for sure cover more ground than I would that day. You get it. 12 hours is long. It seems daunting. I’ve run 12 hours on a couple other occasions and was able to cover 50 and 58.5 miles respectively. I’ve learned that you are going to mentally hurt yourself if you continuously check your watch and notice that “ooh! I only have 10.5 hours left!” Yeah, that’ll make you want to jump in the lake and not run around it.

After giving Christina and Leiana a kiss I toed the starting line and off we went. I settled right into 2nd/3rd place running next to two time defending 24 hour champion Doug and started picking his brain for race strategy, nutrition needs and all kinds of things related to running 24 hours. Already far ahead of us was the guy holding the second fast trail 100 mile time in US history. He was also running the 12 hour race. My old motto came up already 5 minutes into the race. Either he is much faster than me and I have no business staying with him, or he will cave later and I have a chance to pick him off towards the end of the race. Without much suspense, he would lap me 6-7 times and ended up 14 miles ahead of me, setting a new Course Record.

A couple of laps into the race, Doug dropped back as his 24 hour pace shouldn’t realistically match my 12 hour pace, or he would be in trouble in the second half of his race. At this point, my new running friend Chris has moved up and settled in next to me. He was running the 6 hour race (ended up winning it too in a new Course Record) and was happy to find someone to run a decent pace next to. I knew I would have to slow down eventually, but wanted to take advantage of my legs feeling spry. Foolishly, I calculated ahead. What if I ran this pace throughout the 12 hours? Boy, I was setting all kinds of records. It’s funny how your brain can be THAT optimistic. Of course, later on, my per mile pace dropped by 1-2 minutes, squashing my brains earlier optimism.

If I recall correctly, Chris and I ran for 2-3 hours together, but it really felt like 20 minutes or so. We only split up as I had to take a 20 second bathroom break. Good sign, by the way. I must’ve been drinking fluids sufficiently as I passed the color test easily.

Jumping out of the port-a-john I saw Chris up ahead and was briefly going to try to catch up again, but thought better of it and settled into a slightly slower pace than we had been running. Finally, I had come to my senses and realized that another 9 hours laid ahead and I should be saving my legs at least a little bit. 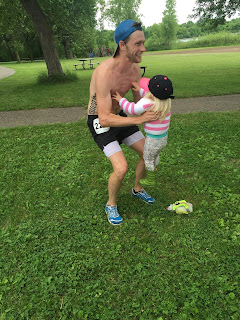 My personal aid station was set up right after the Start/Finish line. I had several bottles filled with Gatorade and some Coca-Cola reserved for later in the race, when I wanted to have sugar and caffeine fueling me. The night before, Christina had actually asked me if I could spare a bottle or two for her during the race, so that she wouldn’t have to drive to the store and I EMPHATICALLY explained to her that I had meticulously planned out my nutrition and counted the calories I would consume per hour and that any deviation would throw a wrench into the entire operation. Needless to say, I didn’t drink a single one of my bottles. Sorry hun J.

A few more laps went by and I had lost count at this point when I saw a little blonde bundle of joy and energy in the distance yelling:”PAPA!” Christina picked her up quickly and ran over to my aid station and I embraced the two. What a great pick me up. Not that I was feeling down or anything, but it never hurts to see those two J. Shortly after this, I went through the marathon mark around 3:45h and was wondering if I could finish 3 marathons in the 12 hour span. We will see.

Leiana told me again that she wanted to race with me and I tried for a few feet to have her run next to me. Only then did she realize that running with me meant running away from mommy. That’s a no no.! She cried almost immediately and I quickly turned around to bring her back. I saw them on the next couple of laps as they were playing in the playground nearby and felt very fortunate to have these two support me in my strange endeavors.

Throughout the next few hours rain and sunshine interrupted each other, but was a welcomed change up in the day. Half way through the race, I cheered on Chris as he was running shorter laps, getting closer to finish his 6 hour race. My 6 hour split was something like 40.5 miles (65km) and would’ve placed 2nd behind him. 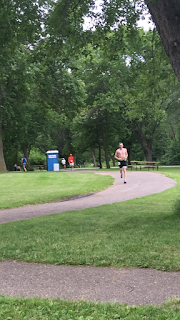 I started setting smaller incremental goals and began with the 50 mile (80km) mark. During my Sandhills 100K in March, I ran the first 50 miles in 7:30h and noticed that I could hit that split again if I simply kept going at my 8:30 minute per mile pace. Indeed, I crossed that mark at 7:29h and was happy to have set a PR during this race. My legs still felt strong and I zeroed in on my next goal. The 100km mark was only 12.2 miles away and I had 2 hours to reach it in order to set yet another PR. Additionally, I have never ran past the 100K distance. So, as soon as I would reach 100.1K I would set a new longest distance PR. It’s crazy how fast the time flew by. I guess running this course in a nice and even rhythm will help you lose track of time. Imagine a washing machine on a gentle cycle and you understand the rhythm, the course lay-out and the excitement of this type of race J.

12 miles (19km) later, going into lap 29, I picked up the pace as I wanted to hit the 100K in under 9:30:41h, which was my PR. The marker never seemed to come and I grew weary picking up my pace even more and staring at my watch as the second ticked by. Where was thi
s stupid sign? I had run this lap 28 times already and couldn’t remember how far down the trail it was. FYI, the brain doesn’t work at max capability when you have been running for 9+ hours. Around a small bend, the sign appeared and I sprinted towards it. Crossing the threshold, I looked down…9:30:36…YES! 5 second PR. I hadn’t anticipated this leading up to the race or even half way through it, but now I was happy to have reached this point. I high-fived myself and lived with the fact that the increased pace over the last few minutes would likely take a toll down the road. However, I had my PR. It was a good day. 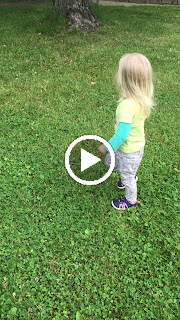 The next two hours went by in a blur until I saw my girls again. Leiana ran with me again about 20 feet or so, but after tripping and falling, she again sought out the comfort of mommy. Can’t blame her J. I was looking forward to that as well, as soon as the 12 hours were up. 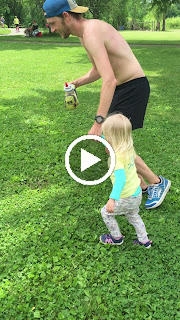 I fought off cramps in my hamstrings for about 45 minutes now and kept them at bay by slowing my pace for a while. I was mad that I hadn’t trained my legs enough to start cramping up on me, but also realized that they had carried me further than ever before, so I made peace with them and apologized to each as well J. 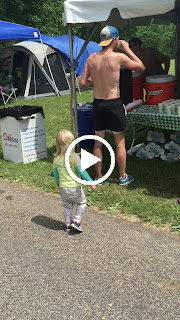 Going into the shorter laps (1/8 mile; 200 meters) allowed each runner to get an accurate distance without being stranded on the long lap as time ran out. Here I picked up my second (or was it my 5th or 6th?) wind and clocked another 20 laps, finishing with 76.9 miles (123.7km), good for second place and 9th best all-time (15 years).

Now I had two priorities, hugging and kissing my family and finally stopping at the aid station that served pizza. Pretty sure I ran off enough calories to have a slice or two. Or three. Or four.


I shared a couple of slices with Leiana and Christina and packed up. We were starving (after all that pizza).

Next morning came and we went back to the Start/Finish area to see the 24 hour runners finish and enjoy a communal breakfast with everyone while awards were handed out. My second place was announced with:” What a shame, this distance would normally win it…”


I hit my goal of running between 75-80 miles. Set new PRs for 50 miles, 100KM, 12 hours and furthest distance run. I didn’t walk at any point, other than picking up fluids at the aid station and never cramped. No blisters and no bonk (feeling down) throughout the entire race. I’m very happy with the outcome am considering coming back in the coming years for the 24 hours. I’ll bring an extra Coke for Christina too.