I consider myself fairly new to ultra-running as I only discovered my passion for it June 2012. I had been running for about a couple of weeks, but it was difficult to motivate myself to get out of the door. It was then that I stumbled upon the Smartphone App "MapMyRun" where one can track their progress online and review it later on a map.
I was with my wife's family in Minneapolis, MN for a weekend and decided to dust off my running shoes that I had purchased in California the year prior before moving to South Dakota. Night had fallen and I trudged around downtown Minneapolis until crossing the river and listening to another "B.S. Report" on my phone. Listening to podcasts made the long run seem fairly short. I remember having to stop about every 10 minutes or so as I felt out of breath. I had considered myself in shape, but more in a soccer-playing-on-the-weekends kind of shape and not running around for miles type of shape.
When I returned from the run I proudly presented my results of running just over 7 miles in about 1 hour and 15 minutes.
Seeing the virtual progress motivated me tremendously. I have always loved statistics and monitoring progress by numbers (thanks to SportsCenter for this!). It was now that I considered running "fun".

I never considered myself a runner before. Growing up in Berlin, Germany I ran Cross-Country one day every year during the city-wide cross-country regional championships. I have no idea what my times, distance or placements were. Back then, it was all about getting out of school for one day.

Coming to the US as an exchange student in Rutland, SD, I joined the football team and cross-country squad in order to fill up my time after school and meet new people. This didn't work out in XC so well, as I was the only member of the Boys' XC-Team. Nevertheless I ran the entire season and practiced by running around the football field during practice. I was the kicker, so my practice consisted of about 2 hours of waiting around until we practiced kick-offs for 10 minutes. (We never tried a field goal or extra point during the entire season. Needless to say we went 0-8).

After a dismal basketball season, where I set a personal career season best of 5 points on 2-32 shooting, we prepared for track season. As noone seemed interested in running the mile or 2-mile I took this as my time to shine and went for the "long-distance" events. We were only allowed to compete in 4 events per meet, so I added the individual 800m and 800m in any relay team that needed an anchor (medley or 3200m). I basically did the 'dirty'-work for the track team, scooping up mile after mile, never finishing better than 2nd in any given event.

By the end of my tenure in Rutland I entered the local Brookings marathon. My goal was simply to survive it and being able to claim having run a marathon. A decent time of 3:32 at age 17 was secondary to the lesson I learned from a fellow runner during the grueling event:


"When you finish, you will be hooked for life."


I let that settle in. I didn't believe her as I hated training as much as going to the dentist. If I could skip out of practice I did it any time I could. Playing soccer was my only activity after this and I never considered running without a ball at my feet as fun.

Later in September, I had returned to Berlin, Germany and that quote came to haunt my thoughts. Was my marathon a once in a lifetime event or can I do it again? I contemplated this and ended up running my 2nd marathon at age 17. I had a pretty severe cold the week before and my doctor prescribed some sort of steroid to get out of bed, urging me not to win in order to avoid being banned from competition. I did as I was told and finished 32,456th or something like that in a horrible experience that inluded severe de-hydration and cramping.

8 years and 4 Marathons later I stilled hated running as practice, but did the occasional marathon to see if I could still finish the distance and to experience that all encompassing "runners' high". Still, I never called myself a runner.


Skip ahead to June 2012. A couple of weeks after that late-evening run in Minneapolis I set out for a Midnight run in Brookings, SD. My wife was with her folks out of town and I was wide awake and ready to disperse some energy. I turned on my podcast-mix of "Around the Horn" and "PTI" and left the front door. I wasn't planning on going long and therefore didn't take any water. I passed a waterfountain about an hour later and drank as much water as I could until I heard it slushing around my stomach. I skipped into the local Wal-Mart a half-hour later and got another drink of water. I was about 9 miles into my run when I decided to finish circumferencing the town. I started cramping heavily and and took of my shoes to give my blistering feet some relief. I walked a half-mile before shuffling back to my front door. I experienced my first runners' high outside of a marathon race and was elated as I had done 12.5 miles. Knowing a half-marathon is 13.1, I dropped my shoes and circled the park across from my house and finished proudly at a time of 2:08.
Being able to re-live my run on the internet the next day by following my route on Mapmyrun got me hooked.

Now, I was a runner. 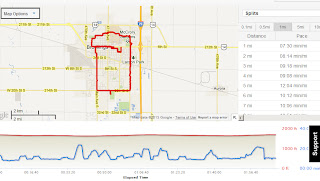